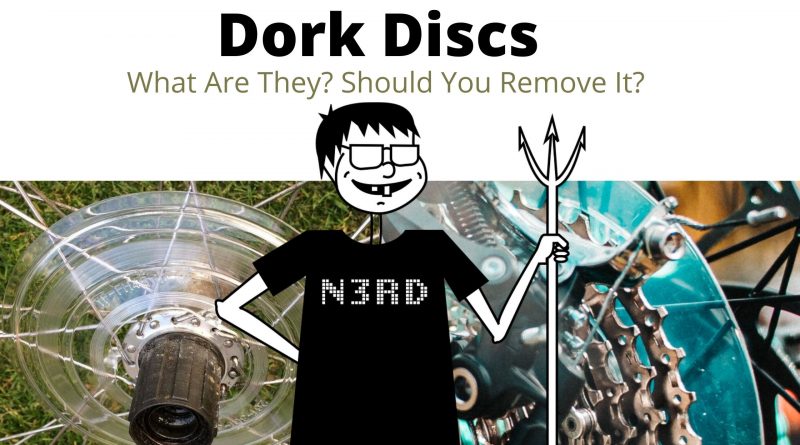 Dork Discs: What Are They For And Should I Remove Mine?

A lot of new bikes come with something known as a dork disc installed as standard. There is some debate about whether or not the dork disc should be removed or kept, and people seem to hold some quite strong opinions on the matter. Some people see benefits to keeping it on the bike, while others see it as something of a faux pas to keep it and get rid of it as soon as possible.

Why is there so much difference of opinion? What is the dork disc for? Is it still necessary? What are the pros and cons, and how have things changed over the years? And, finally, should you remove it?

What Is A Dork Disc And What Is It For?

The dork disc is, essentially, a spoke protector. It is a small, clear, plastic disc that sits between the rear spokes of the wheel and the gears.

It is designed to stop the chain from getting thrown into the spokes of the rear wheel if it comes off the largest cog on the drive train, which could lead to the chain damaging the spokes.

However, if the chain does come off and hits the spokes, there could be larger issues than just damaging the spokes or the chain.

It can also cause damage to other parts of the rear end of the bike. It can damage the derailleur, the derailleur hanger, the chain guide, the cassette, and even the rim or the frame of the bike itself. It could, in short, be a catastrophic accident. Spokes themselves, or chains, might not be too expensive to replace, but some of the other parts that could be damaged are much more expensive. The dork disc is designed to prevent such accidents from happening.

Should I Take Off My Dork Disc?

Taking the dork disc off comes down to personal preference. Some riders think that it is unnecessary and looks ugly on the bike.

When someone has just spent a large sum of money buying a bike and it is looking shiny and new, they might not like the idea of having the dork disc on their bike, possibly preferring a more “clean” look to their bike.

Other riders think that, while it is perhaps not necessary, it doesn’t particularly hurt to have that extra bit of safety on the trail for your spokes.

One thing that riders learn quickly when riding bikes is that things can – and often do – go wrong without any warning. Some riders would rather have as many insurance policies against such potential problems as possible. However, there is another argument that if the dork disc itself breaks then pieces of it could damage the spokes as well.

Ultimately, it comes down to a rider’s own personal preference, and they should weigh up both sides of the argument – the aesthetics of the bike vs the extra safety of having the dork disc.

Is A Spoke Protector Necessary?

Some riders argue that these days a dork disc is not as necessary as perhaps they once were.

Modern derailleurs work a lot better than older models, meaning that they shift far more accurately. This, in turn, limits the possibility of the chain slipping and damaging the spokes.

Of course, the fact that it is less likely does not mean that it is completely impossible, and that is something to consider – is the risk worth it.

Modern technology also means that the newer dork discs are much smaller and have less impact on the overall appearance of the bike, so the arguments for and against it have both been cancelled out to some extent.

There is also an argument that regular maintenance should ensure that the derailleur works well and negates the need for a spoke protector.

Therefore, riders need to ask themselves if they have enough faith in their own maintenance ability, as well as faith in the components on their bike, to risk not protecting their spokes.

How To Remove A Dork Disc

There are a couple of ways to remove a dork disc, depending on how much work you want to do.

1) The “correct” way to do it is to remove the cassette and pull it off. This takes a little bit of work and the appropriate tools. We have a full tutorial here: How to Replace a Mountain Bike Cassette (Step-By-Step Guide)

2) A lot of riders take a quicker, less “clean” route of removing the disc by simply cutting it away. This can be done with tin snips and many other forms of cutting devices. However, it can be tricky not to damage the spokes while cutting the Dort Disk off – so take care!

If you have the correct tools to remove your cassette, then it’s recommended to do so! This is because some Dork Disks can be challanging to cut off, which can end up taking more time than simply taking the cassette off – plus you don’t risk damaging your spokes(or hands).

Where to Buy a Dork Disk/spoke protectors?

Final Thoughts (Should I Remove My Dork disk?)

Is it worth going to the effort of removing it if it doesn’t really matter? Modern dork discs are much less noticeable and intrusive on the look of the bike than on older models, but some people still do not like the look of them.

Some people also worry about how they will be perceived if they have a dork disc on their bike. They also argue that it is no longer really needed as a safety feature.

Also, for riders who are not as confident in their own ability to perform maintenance on their bike, it is worth considering keeping the dork disc on so that they don’t have to worry about an accident caused by a poorly maintained drive train. 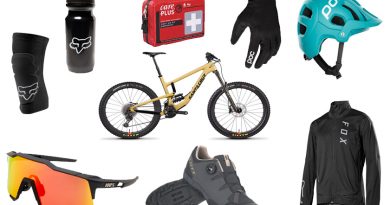 What Equipment Is Needed For Mountain Biking? (Checklist) 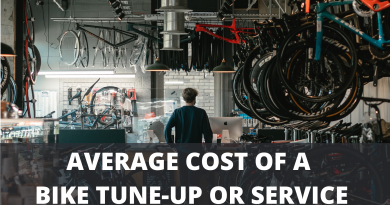 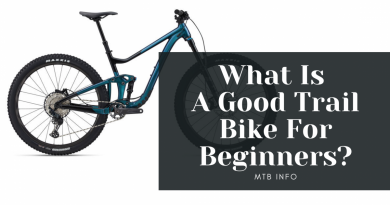 What Is A Good Trail Bike For Beginners?